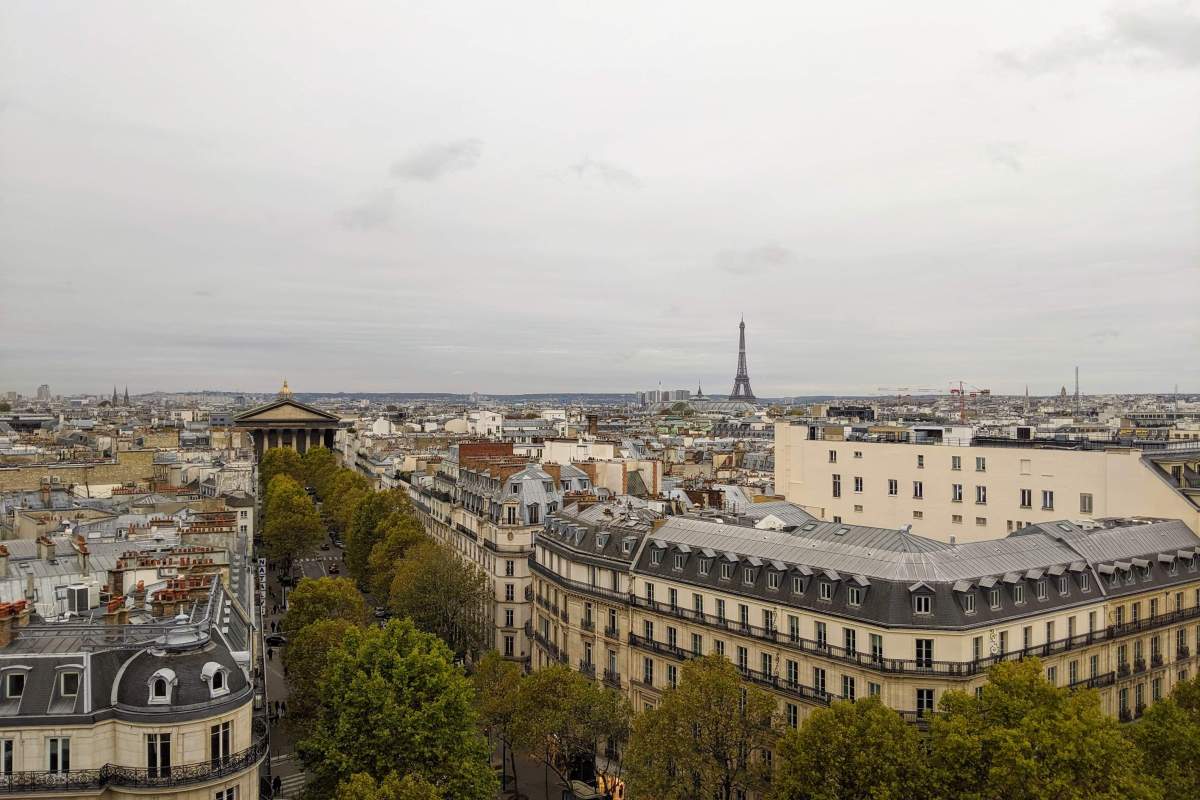 Here we are, in the middle of our first continental European adventure. We’re in Paris! We chose Paris because it was one of the places Sophie most wanted to see, and we decided we really wanted her to get excited about our travels- so may as well start off with a bang!

When we got to Paris, we met up with Eric’s sister who is working in London for a few weeks, so took the Eurotrain down to join us for the weekend. Because of the beautiful autumn day, one of the first things we did was head to the Eiffel Tower. We spent a few hours there and really enjoyed watching the tower change as the sun went down and it lit up. We polished off a bottle of wine on the grass while we enjoyed the sight.

Then after leaving the tower we decided to take the Metro to the Arc de Triomph, thinking it would be lit up beautifully. Turns out, it isn’t, but it was still cool to see.

After leaving the Arc, we noticed Sophie’s blood glucose plummeting so we did a quick correction right there under the Place Charles de Gaulle- we suspended insulin and shoved a bunch of candy in her. We were on our way to find some supper, too, so it worked out okay. But that’s the way of travelling with type 1 diabetes, you need to be able to stop wherever you are and do what you need to do to stay alive and get to the next location!

We had a fantastic French meal at a little local restaurant in our apartment’s neighbourhood then all retired to bed, exhausted.

Day 2 was forecasted to be rainy and cold, so we had bought tickets to the Musée d’Orsay. We headed over there early and the line-up (for pre-purchased tickets!) was already around the block. It was jaw-dropping. We would end up standing in the rain for an hour. However, we finally found the right person to ask for help- I walk with a cane due to my multiple sclerosis and they kindly gave me access to the premiere line/handicapped door. That’s awesome that they don’t make people who clearly have trouble walking stand in line for an hour. Some people would consider it skipping the line but I sure don’t- I’d rather not have MS and have the ability to stand in line longer.

So we got in to the museum, which was great. The rain was miserable. (And I like giving this perk to my travel companions, who are so patient with my slow walking and need for extra rests).

There was a fantastic Degas exhibit on.

And then we saw the Monets, the Renoirs, the Van Goghs, and the Gaugins. It was all just beautiful.

After the Orsay, we had lunch at a great boulangerie, then headed to the Museum of the Legion of Honour. This is a free and relatively unknown museum in Paris dedicated to military medals from all over the world but especially France. There is a large section just about the Legion of Honour and its history from being instituted by Napoleon, including the original medal worn by Napoleon and the Decree written by him.

This was important to me to visit because my grandfather was awarded a knight of the Legion of Honour last year, a year before he died, for his part in WWII as a Canadian soldier who helped liberate France. My Papa left me this medal when he died 7 months ago and it is one of my most treasured possessions.

After the Legion of Honour museum, I needed a rest so I went back to the apartment while Eric, Sophie, and Eric’s sister went to the Champs Elysee. I’ve been before and shopping doesn’t interest me, so I was fine with missing it. Everyone was happy.

We finished off the day with a walk to the Printemps mall, a stunning (very) upscale mall in our neighbourhood with views over the city, and a beautiful glass dome restaurant.

After dinner, we said goodbye to aunt Nicki as she had to head back to London, and we went to bed early.

Day 3 started with a trip to Île de la Cité and Sainte Chapelle. There was another huge line (I wonder how much longer lines there are now that people can’t visit Notre Dame, so more visit Sainte Chapelle?) but we again got handicapped access and got to skip the line.

The church was simply stunning, the most stained glass I’ve ever seen in one place.

Then we toured the Île de la Cité for a bit.

It was a beautiful, crisp fall day along the Seine. We headed into the Latin Quarter and ambled the narrow lanes (stopping for coffee and pain au chocolat) as we made our way towards the Pantheon.

The Pantheon is an awesome mausoleum housing the remains of France’s most distinguished citizens. It was originally built as a church but securlarised during the French Revolution. The crypt below it (that was open to tour) housed the remains of Victor Hugo, Louis Braille, Voltaire, Marie Curie, Alexandre Dumas, and so many more.

Then we had a lovely lunch outside of the Pantheon.

And on to the Luxembourg Gardens.

Where we watched the sailboats on the fountain pond. Each sailboat has a country flag and we eventually found the Canada boat!

And then found one of the 5 Lady Liberties in Paris (5 French models for the big one they gave to the USA).

After the Luxembourg Gardens, my legs were complete jelly. We’d walked over 5km so far in the day and that’s well over my limit (especially after not sleeping well). So we came back to the apartment.

For the rest of the week we have a few things planned like Versailles, Montmartre, a river cruise, more of the Latin Quarter, and the Louvre. Check back in later for more photos and updates! 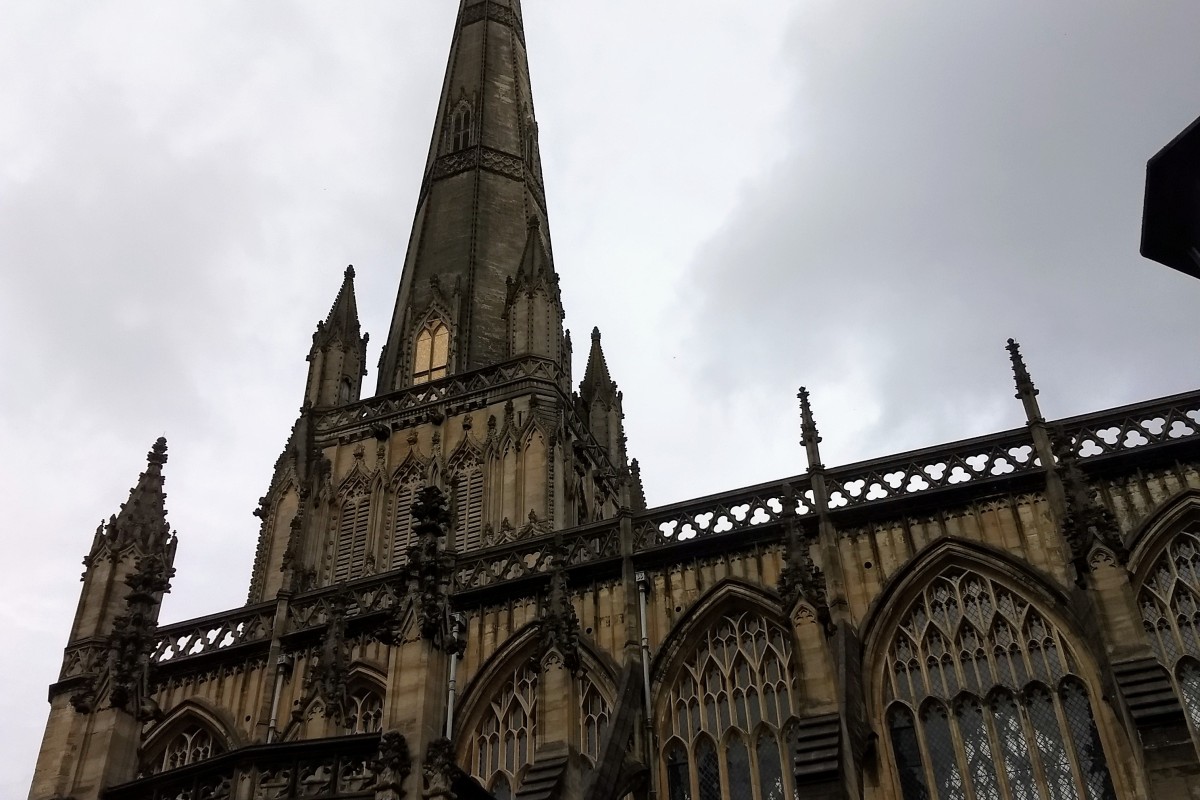 Once upon a time, before cars were around and it took three days to travel from one side to the other of modern-day Bristol, Redcliffe was its own thriving port town next to the busy city of Bristol. History notes that there was a lot of rivalry between these two cities (for age-old reasons too numerous and odd to recite here). However, in 2019 Redcliffe is just a part of Bristol, sort of a neighbourhood area marginated on the edge of the river. We’ve driven through and around the area countless times.

One building Redcliffe is famous for is St. Mary’s Church. Its spire is the tallest building in Bristol (at 90m). While we’ve driven past and admired it many times, we’ve never gone in. I was at a charity shop a few weeks ago and found this awesome ink sketch dated 1940 and picked it up. It now hangs in our front hall.

So now it was on our ‘to-do’ list of places to get to, things to explore.

We learned a lot. St. Mary’s was the church where merchant sailors would began and end their journeys, praying at the shrine of Our Lady of Redcliffe.

John Cabot came to St. Mary’s upon his return from his renowned sail to America where he discovered Newfoundland. (There’s a big main road here called Newfoundland Rd, too). He presented St Mary Redcliffe with a whale bone from his journey. It still hangs there today, 500+ years later.

The whale bone is to the right, directly above Sophie’s head.

Beside Sophie is a statue of Queen Elizabeth I, who visited St Mary’s Redcliffe and described it as “the fairest, goodliest and most famous parish church in England”.

In 1997, five-hundred years after Cabot first set sail Eastward, a replica of his ship The Matthew sailed from Bristol on the same journey to commemorate it. The crew of the second Matthew gathered at St Mary’s Redcliffe right before they set sail to pray for a safe journey and receive blessing.

Model of The Matthew over the door of the Church

Here’s some photos of this gorgeous gothic church:

Then we stumbled upon a neat science experiment, right there in the Church, The Chaotic Pendulum.

There were a lot of notes about the building through history since it was built, about various wars and conflicts that threatened the entire structure. Most notable was the Bristol Blitz in WWII. Because Bristol was a hub for both aviation and shipping, it was a prime target for the Nazis and was the 5th most heavily bombed British city in the war. St. Mary’s Redcliffe was right on the flight path of the German Luftwaffe and suffered some minor damage.

During one large raid on Good Friday, April 11, 1941, a huge bomb hit only a block away, and a large chunk of tramline was thrown from the blast over the rooftops of nearby houses and landed in the churchyard. It’s been left there since, as a reminder of how close a call the church had and of how senseless war is.

We enjoyed touring St. Mary’s, exploring a little part of our new hometown, and are happy that we’ve now seen the building behind our lovely hallway picture.

PS- Happy Thanksgiving to all those back home in Canada celebrating this weekend! We miss you! We’re doing a roast chicken and all the trimmings this weekend, and I made Nanaimo bars for dessert and to share with the neighbours. Have a fab turkey day!!!